5 Ways to Make Money with Your Car

If you’re like most people, you are very grateful for your car. You wouldn’t know what to do without it. But it’s not as though you aren’t paying for the privilege of being able to get up and go anywhere whenever you want.

Cars are extremely expensive to own. As you probably know, they’re also an asset that begins depreciating the moment you buy them.

That’s why so many people are learning how to make money from their cars. They might be depreciating assets, but they’re still assets with massive earning potential if you know how to use them.

How to Make Money from Cars: 5 Easy Ways

According to a report released by the U.S. Department of Labor’s U.S. Bureau of Labor Statistics titled, Consumer Expenditure in 2016, Americans spend an average of $4,793 a year to operate their vehicles.

In other words, owning a car is expensive.

No wonder more and more people are quickly trying to figure how to make money from their cars.

If you’re ready to do the same, here are five very simple options that don’t require any special skills and which you can start making money from right away.

1. Turn Your Car into a Commercial

Whether you’re driving to work, picking up the kids, or running errands, your vehicle could be putting money in your pocket by advertising a company’s services.

All it takes is adding a car wrap to your vehicle.

By doing so, you basically turn your car into a moving billboard. Wherever you go, you expose your company to potential customers.

Here are three different services that can connect you with companies willing to pay to outfit your car in one of these wraps:

Best of all, you really don’t have to change your driving habits. Just keep using your vehicle as you always do and you’ll make money at the same time.

If you have a van, truck, or large SUV, you can act as a sort of one-person-moving-company for people who don’t have vehicles with as much space.

Keep in mind, you don’t actually have to get out and do any of the heavy-lifting yourself.

Instead, all you have to do is show up, let people load their things into your vehicle and then take them to their destination.

A lot of people use this service because they want to purchase something at a garage sale or flea market but don’t have the means to transport it.

Other people simply don’t want to pay the exorbitant prices that most stores charge for home delivery.

Sign up for a service like TaskRabbit and you can make money providing this simple service around your local area.

Another very popular option is handling much smaller deliveries for people. This is great for anyone who wants more business (more people order food than large dressers) and would rather work (mostly) in solitude.

People send you their food orders, you go to the restaurant and place them, and then make the delivery.

Postmates and DoorDash are just a few of the most well-known brands that cater to the food delivery business. DoorDash is typically or larger businesses and Postmates is all about delivering good food from various restaurants. 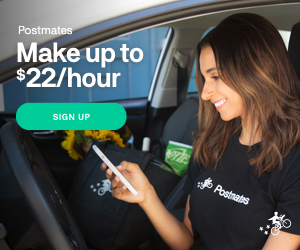 Delivering groceries can pay up to $25 an hour. Instacart and Shipt are a few companies that allow drivers to get paid to deliver groceries, giving them the freedom to work as many hours as they want on whatever schedule they choose.

You can still be your own boss and earn cash on your watch.

Aside from the money, the best part about any of these jobs is that you can spend the vast majority of your time listening to your music, a podcast, or an audiobook while you’re getting paid.

One of the most popular ways to make money with cars right now is to act as a cab driver in your free time.

This setup is almost identical to the way a traditional cab service would work. People who need rides submit a request through a ride-sharing app.

You are then notified that someone in your area (which is inside parameters you set) would like a ride somewhere.

You pick them up and bring them to their destination. That’s it. The app takes care of handling the transaction, so there’s no need for you to worry about taking cash or giving out change.

The most popular ride-sharing services right now are Uber and Lyft, but there are plenty of other options to choose from, as well.

5. Let Other People Drive People Around

Maybe you don’t actually want to add hours to your workweek by driving other people around, delivering their food, or transporting their things. Maybe you don’t exactly love the idea of plastering your vehicle with advertisements, either.

You don’t even need to pause Netflix.

HyreCar is a service that connects people who own cars with people who don’t but would like to use them to drive for Uber or Lyft. As those two services aren’t going away anytime soon, they will continue to represent opportunities to make money for people who own cars.

However, now, automobile owners don’t actually have to do the driving in order to make money. Their schedules can remain exactly the same while their bank accounts benefit.

Imagine spending a weekend at home relaxing and knowing that you’re getting paid the entire time.

Imagine if the next time you left your car at home while you went on vacation, it was busy providing you a passive income for your trip.

Start Putting Your Car to Work

Even if you don’t need extra money at the moment, owning a car gives you a great opportunity to pay down debt, save for retirement, or just put some extra room in your budget.

As you can see, it really doesn’t take a lot of work.

Rent a Car, Drive For Uber and Lyft

HyreCar is the industry leading carsharing platform for rideshare drivers.

Start Getting Paid To Deliver With Postmates!